GNU Octave is a high-level language, primarily intended for numerical computations. It provides a convenient command line interface for solving linear and nonlinear problems numerically, and for performing other numerical experiments using a language that is mostly compatible with Matlab. It may also be used as a batch-oriented language.

GNU Octave is also freely redistributable software. You may redistribute it and/or modify it under the terms of the GNU General Public License (GPL) as published by the Free Software Foundation.

Octave was written by John W. Eaton and many others. Because Octave is free software you are encouraged to help make Octave more useful by writing and contributing additional functions for it, and by reporting any problems you may have.

Octave was originally conceived (in about 1988) to be companion software for an undergraduate-level textbook on chemical reactor design being written by James B. Rawlings of the University of Wisconsin-Madison and John G. Ekerdt of the University of Texas. We originally envisioned some very specialized tools for the solution of chemical reactor design problems. Later, after seeing the limitations of that approach, we opted to attempt to build a much more flexible tool.

There were still some people who said that we should just be using Fortran instead, because it is the computer language of engineering, but every time we had tried that, the students spent far too much time trying to figure out why their Fortran code failed and not enough time learning about chemical engineering. We believed that with an interactive environment like Octave, most students would be able to pick up the basics quickly, and begin using it confidently in just a few hours.

Full-time development began in the Spring of 1992. The first alpha release was January 4, 1993, and version 1.0 was released February 17,

Since then, Octave has been through several major revisions, is included with Debian GNU/Linux, openSUSE, and many other GNU/Linux distributions. Octave was reviewed in the in the July, 1997 issue of the Linux Journal. Clearly, Octave is now much more than just another courseware package with limited utility beyond the classroom. Although our initial goals were somewhat vague, we knew that we wanted to create something that would enable students to solve realistic problems, and that they could use for many things other than chemical reactor design problems. Today, thousands of people worldwide are using Octave in teaching, research, and commercial applications. 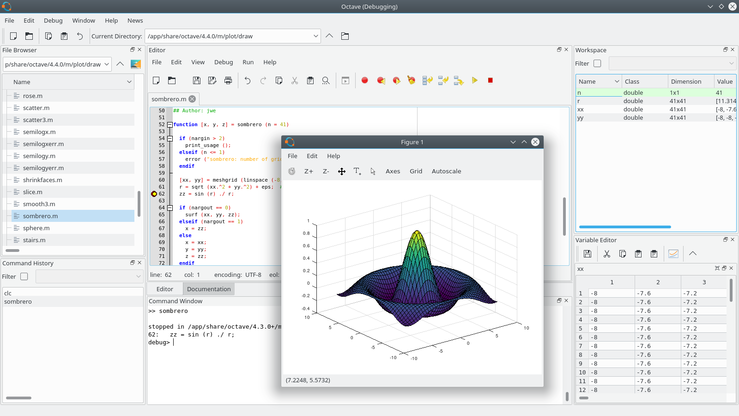